In my college years, I was a nanny for the cutest little curly red haired baby girl you ever did see! Her parents traveled quite a bit and it was not unusual that I would often make a drive to the airport to pick up or drop off one of them. Often times, the little one and I would venture into the airport and wait for their arrival.

During these times, I loved to people watch. I would write stories in my mind of who the other individuals at the gate were waiting on and then see how right I might’ve been when their person got off the plane and they were reunited. One particular trip to the airport I remember watching a lady at another gate as she was waiting, she was watching intently at each person who was deplaning and after each one filed past her and no other bodies were left to exit, she was still waiting…

I wonder if you identify with that feeling? That waiting feeling.

At the very beginning of Luke Chapter 1, we meet a couple of people who are well acquainted with that waiting feeling. Zachariah and Elizabeth had been waiting to make a family. They were hoping for a child and they had been waiting and waiting…years of waiting. Years that likely started off with much prayer and hopefulness and years that turned into dwindling dreams and doubt from all the waiting.

Waiting is not pleasant to talk about is it? Starting is exciting and finishing is fulfilling, but waiting, well that’s the difficult stuff. Waiting is the part where it’s hard work but there’s nothing to show for it. Waiting is a test and you’re never sure how long it will last. Waiting can even be a physical ache as your heart hurts from the longing. Waiting can be lonely, feeling like you’re left tapping your foot impatiently while the rest of the world walks out on you.

I imagine that Zachariah and Elizabeth knew well the pain of waiting. The pleas to God that felt unanswered, the hurt of watching others grow their family while theirs remained a party of two, the challenge to their faith as they turned another year older on the calendar, their hair was getting grayer and still they waited.

Ultimately, Zachariah and Elizabeth made it through the waiting and they welcomed a little world changer named John. That lady who was waiting at the airport, I’m not sure if she ever got her reunion or not, I hope so.

If you my friend find yourself in the middle of a lengthy waiting period and it feels like you are at that airport gate watching everyone else have a reunion while you keep waiting and hoping your turn comes, I want you to know I see you. More importantly, God sees you.

I don’t know how my story will end and I can’t begin to guess your grand finale either, but this I do know, as we move forward while waiting, God is the very best company and our waiting will not be wasted.

Friends, it’s been a theme of my life. I wonder if you’ve found it in yours as well? I avoid things.

Not all things. I embrace laughter and watching the sunset never gets old to me. Coffee? Yes, please, A day at the spa, sign me up! Time with a good friend, the best!

END_OF_DOCUMENT_TOKEN_TO_BE_REPLACED

When I was a little girl, I hated the dark.  Going to bed at night needed to involve a night light and if for some reason I woke up and needed my mom or dad, my heart would palpitate at the thought of having to get through the dark house to get to safety.   I would close my eyes and run the length of the house and as quickly as my feet would carry me, scoot into my parents room where I didn’t have to be alone in the dark.

It’s strange as I think back to this because somewhere throughout life, I have grown comfortable with the dark.  Now for sleeping purposes this is just fine, but what is concerning is how comfortable I’ve grown with the darkness in everyday life.

Anyone else out there prone to darkness?  For me, darkness is easy.  END_OF_DOCUMENT_TOKEN_TO_BE_REPLACED

Mary asked the angel, “But how can this happen? I am a virgin.”

The angel replied, “The Holy Spirit will come upon you, and the power of the Most High will overshadow you. So the baby to be born will be holy, and he will be called the Son of God.  What’s more, your relative Elizabeth has become pregnant in her old age! People used to say she was barren, but she has conceived a son and is now in her sixth month. For the word of God will never fail.”

Mary responded, “I am the Lord’s servant. May everything you have said about me come true.” And then the angel left her.  – Luke 1:34-38

So imagine with me…an angel has appeared and announced to Mary, Congratulations! You are single and we know you are engaged to be married to Joseph but God has chosen you to give birth to His son.

How would you respond?

Mary asked a very obvious question…Ummm…I’m a virgin, how is this possible?

Good question Mary!  It would probably be the first of at least a hundred questions I would have.

The angel Gabriel went on to explain that she would not only be with child, but that child would be the Son of God.  Mind blown! END_OF_DOCUMENT_TOKEN_TO_BE_REPLACED When Herod was king of Judea, there was a Jewish priest named Zechariah. He was a member of the priestly order of Abijah, and his wife, Elizabeth, was also from the priestly line of Aaron.  Zechariah and Elizabeth were righteous in God’s eyes, careful to obey all of the Lord’s commandments and regulations.  They had no children because Elizabeth was unable to conceive, and they were both very old. – Luke 1:5-7

I’m wondering if you’ve ever had hopes and dreams that didn’t turn out?  A great plan that just never came to be?  I hope you can answer “no” to these questions, but my guess is, if you are breathing, you’ll probably answer “yes”.  Our circumstances may be different but dwindling hope feels the same doesn’t it?

As I read Luke 1:5-7 I am challenged by Zechariah and Elizabeth’s response to their unfulfilled dreams and likely dwindling hopes. END_OF_DOCUMENT_TOKEN_TO_BE_REPLACED Gratitude is not my natural disposition.  I sure wish it was!  But, often times I focus more on my have not’s than the many things I’ve been given.  Can any of my friends reading this relate?

Is it easy for you to focus on what you want and yet don’t have?  What you wish your circumstances were in comparison with what they are?  The seemingly unanswered prayer.  The broken relationship.  The health problem.  The lack of resource.  We can find it very easy to be consumed with what we lack instead of giving thanks for all that we have. END_OF_DOCUMENT_TOKEN_TO_BE_REPLACED 15 Do not love this world nor the things it offers you, for when you love the world, you do not have the love of the Father in you. 16 For the world offers only a craving for physical pleasure, a craving for everything we see, and pride in our achievements and possessions. These are not from the Father, but are from this world. 17 And this world is fading away, along with everything that people crave. But anyone who does what pleases God will live forever.

Is this passage relevant to our daily lives or what?  Wow!  After reading it, my first thought is that this passage needs to be in regular rotation for me.  I don’t know about you, but living in this world, it seems we are bombarded relentlessly by all kinds of messages that attempt to influence how we spend our time and attention and the majority of those things have no eternal value.  END_OF_DOCUMENT_TOKEN_TO_BE_REPLACED 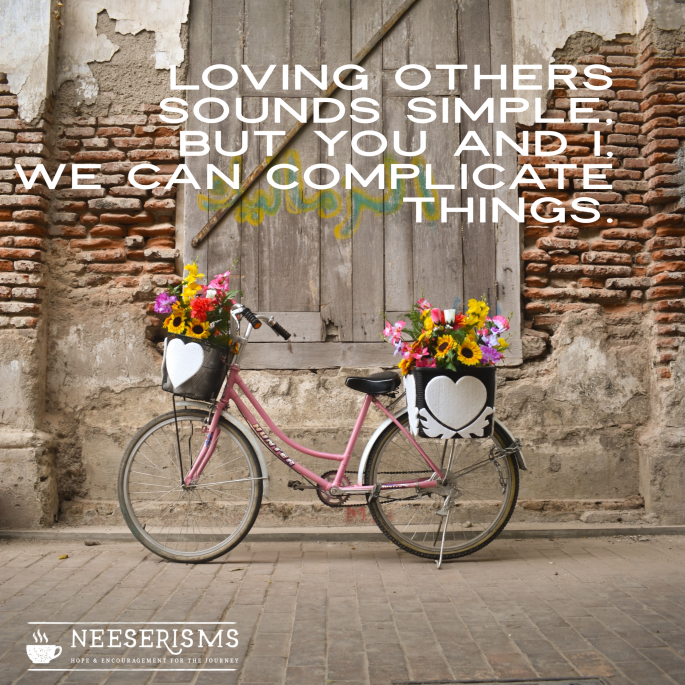 Christ came to set you and I free, He set us free so we could love one another, so that we could spread His love to those around us who need to feel it and know it, just as we want to feel and know it.  It’s simple really, but we can make it difficult fairly easily.

We make it difficult when we come up with our own plans, when we develop our own agenda and what we want crowds out God’s plan and closes our ears to His voice. END_OF_DOCUMENT_TOKEN_TO_BE_REPLACED

How do you respond when you feel unsafe?  When you have exposed your weakness in an effort to be authentic, only to get a swift kick in the gut as a “thank you”.

I can tell you what my immediate reflex is.  Shut down mode.  Walls up.  Armor on.

How do you remain open and real in the midst of betrayal?  How do you continue to fully show up and engage when you have been hurt and disappointed?  How do you find a path forward with someone who may never own up to the harm they’ve caused? END_OF_DOCUMENT_TOKEN_TO_BE_REPLACED

Probably one of my least favorite phrases in life has been, “It is what it is”.  I think because I’ve seen it used as response to settling for less or a hall pass for not showing up for excellence.  When details are left unattended, things are seemingly falling apart and that one person just chimes in with, “it is what it is”.  That comment in the thick of things sends me to another stratosphere.  What I feel like I’m hearing is, “deal with it”, “it’s fine, get over it”, “it’s not a big deal, move on” and these notions irritate the life out of me!

Anyone else?  Please say yes!  END_OF_DOCUMENT_TOKEN_TO_BE_REPLACED